Jinja has an attractively lush location on the northern shore of Lake Victoria above the Ripon Falls, identified by Speke in 1862 as the source of the Nile, but submerged following the construction of the Owen Falls Dam in the 1950s. The colonial town was formerly the industrial heartland of Uganda, with a current population of 300,000 people.

Jinja & The Source of The Nile

One of Uganda’s largest town, Jinja, lies about 80km east of Kampala, overlooking the point where the Nile flows out of Lake Victoria (the Source of The Nile). And it is the mighty river rather than the moderately interesting town that attracts visitors to Jinja.

The thrilling series of grade-five rapids below Bujagali Falls, a magnet for adrenaline tourists, has emerged as perhaps the single most popular tourist activity in Uganda, arguably surpassing even the mountain gorillas of the southwest.

There is also a certain poignancy attached to standing on the slopes from where Speke first identified that geographical Holy Grail which, less than a decade earlier, had lured an obsessed (and hopelessly misdirected) Livingstone to a feverish death near Lake Bangweulu in Zambia.

No less impressive is the knowledge that the water flowing past these green slopes will eventually drain into the Mediterranean, following a 6,500km journey through the desert wastes of Sudan and Egypt.

Jinja has an attractively lush location on the northern shore of Lake Victoria above the Ripon Falls, identified by Speke in 1862 as the source of the Nile, but submerged following the construction of the Owen Falls Dam in the 1950s. The colonial town was formerly the industrial heartland of Uganda, with a current population of 300,000 people.

Although its population makes it one of the largest urban centers in Uganda, Jinja is far from a metropolis that straddles the source of the Nile. First-time visitors wandering around Jinja’s compact, low-rise town center might reasonably reflect on what they can expect of the country’s third-largest town!

Jinja suffered severely during the Amin years and subsequent periods of economic and political turmoil. Still, a more recent economic upswing has been mirrored by the emergence of the river corridor as a major tourism center in the region, emphasizing adrenalin-oriented activities.

The town center admittedly boasts little of genuine historical note, though some fine colonial-era Asian architecture — epitomized by the restored 1919 Madvhani House on Main Street — complemented by a spread of thickly vegetated residential suburbs carved from the surrounding jungle, does give Jinja a compelling sense of place.

Getting There and Away

Jinja lies along the surfaced Nairobi—Kampala road, 82km east of Kampala and 131km west of Tororo. Owing to heavy traffic in Kampala and slow trucks along the way, the journey in a private vehicle now takes almost two hours.

On the outskirts of Jinja, the road from Kampala crosses the Owen Falls Dam, shortly after which there is a roundabout where a right turn leads to the town center and a left turn to Bujagali Falls.

Regular minibus-taxis to Jinja leave Kampala from the old taxi park throughout the day. Tickets cost UGX 10,000. There is also plenty of public transport from Jinja to Tororo and to Mbale via Iganga.

All of the reputable rafting companies offer a free transfer from Kampala as part of their rafting package. Many regular commuters between Kampala and Jinja now prefer a northern route via Gayaza and Kayunga to the increasingly slow and congested main Jinja highway. The alternative is 30km longer, but the road allows a quiet, safe, and enjoyable drive, while the journey takes the same time.

To get to Gayaza, head north out of Kampala through either Wandegere junction or Mulago hospital roundabout. These roads meet after 1km at a roundabout where you bear right (turn left, and you’ll head to northern Uganda). Alternatively, head north to Gayaza from Ntinda past the Ndere Troupe Centre. The initial section leaving Kampala is pretty hectic. Still, beyond Gayaza, a quiet road runs all the way to Jinja (the road emerging onto the Kampala—Jinja highway opposite Nile Breweries at Owen Falls Dam). This road is recommended to travelers headed to Kalagala Falls, the Haven, and Hairy Lemon Island on the west bank of the Nile. 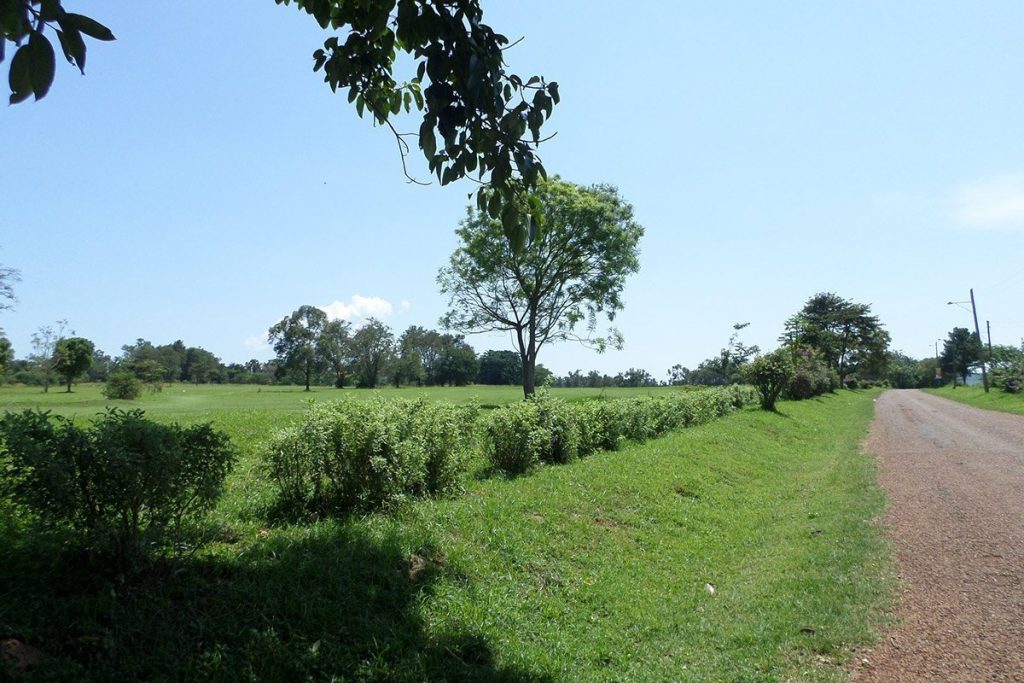 This lovely course, overlooking the Nile and at one time famous for games being interrupted by a stray hippo, is open to non-members at UGX 10,000 per round (UGX 20,000 at weekends). Golf clubs are available. UGX 5,000 is charged to visitors who want to use the 10m x 25m swimming pool or squash or tennis courts.

Keen golfers may also wish to stop at the Mehta Golf Club in Lugazi, midway between Kampala and Jinja, where the Asian owners of the town’s sugar factory have created an utterly surreal golfing paradise in a lush valley hidden from the vulgar gaze of the masses toiling in the factory and the surrounding cane plantations. It has to be seen to be believed! Good curry lunches can be arranged. 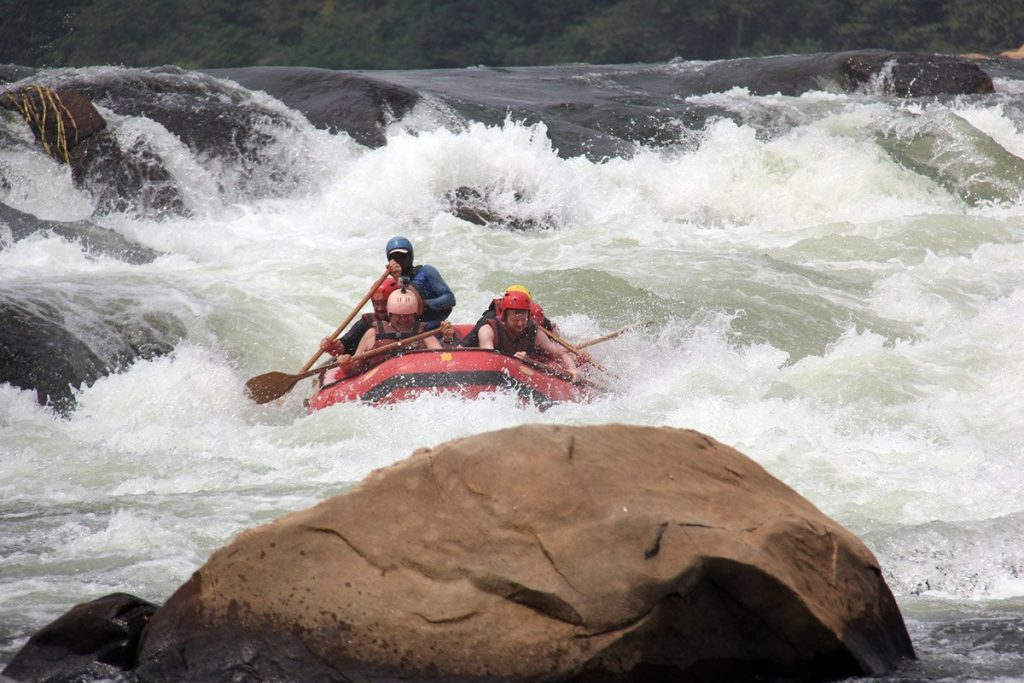 Two-day rafting trips are also available through the same companies. The first day covers the same ground as the day excursion, with an extra rapid called Novocain tagged on at the end. On the second morning, four more rapids are traversed: Hair of the Dog, Kula Shaker, Nile Special, and Malalu. After lunch, the going is smoother, though the day culminates with one last rapid called Weleba.

Kayaking Bujagali is also a top spot for kayaking, attracting experienced proponents from across the world. More testing than rafting, kayaking offers (in the words of an appreciative reader) ‘the opportunity to develop your own skills, rather than just bouncing along in a raft controlled by the professionals’. Courses and expeditions are offered too.

The expeditions are based at Nile River Explorers Camp (raftafrica.com) at Bujagali Falls. Instructors are trained to the UK’s BCU standard. Options start with a one-day introductory course (US$140) and progress to longer and more testing two-/three-/five-day courses (US$235/330/500).

Gentler cruises explore calmer stretches of the river using open-top kayaks (US$75 for a full day with packed lunch from Jinja’s Indulge deli). 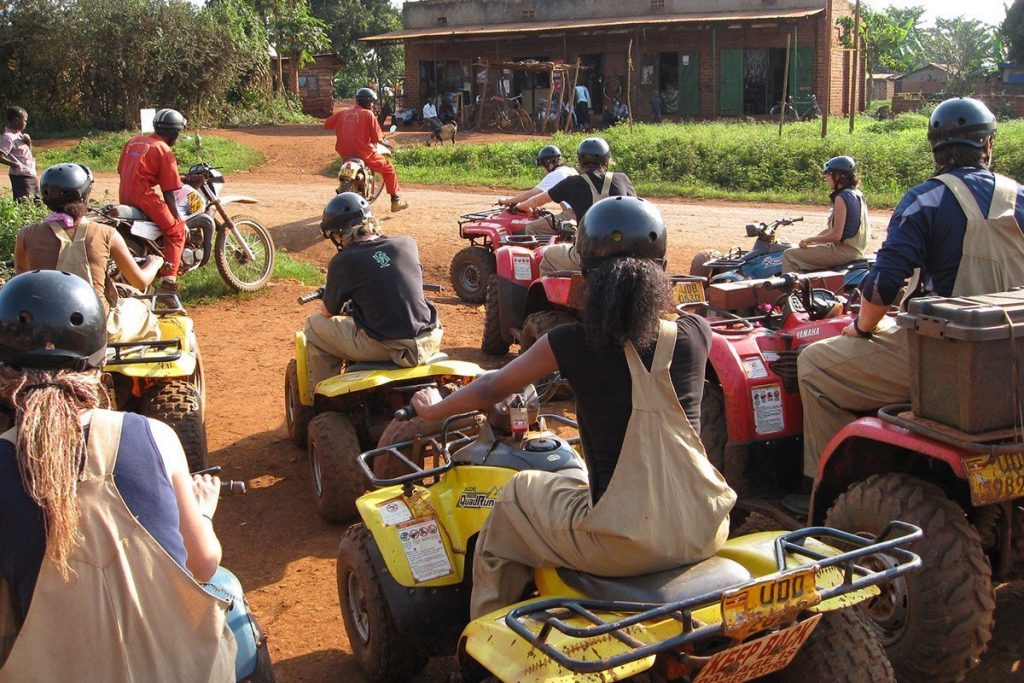 Quad-biking trips out of Bujagali between some stunning Nile viewpoints using local footpaths and tracks Day rates range from US$35 per person for an hour-long ride to US$125 per person for a nine-hour day with lunch. Two—three-day trips to explore the Nile Valley are also available, and quad-bike safaris in Lake Mburo National Park. 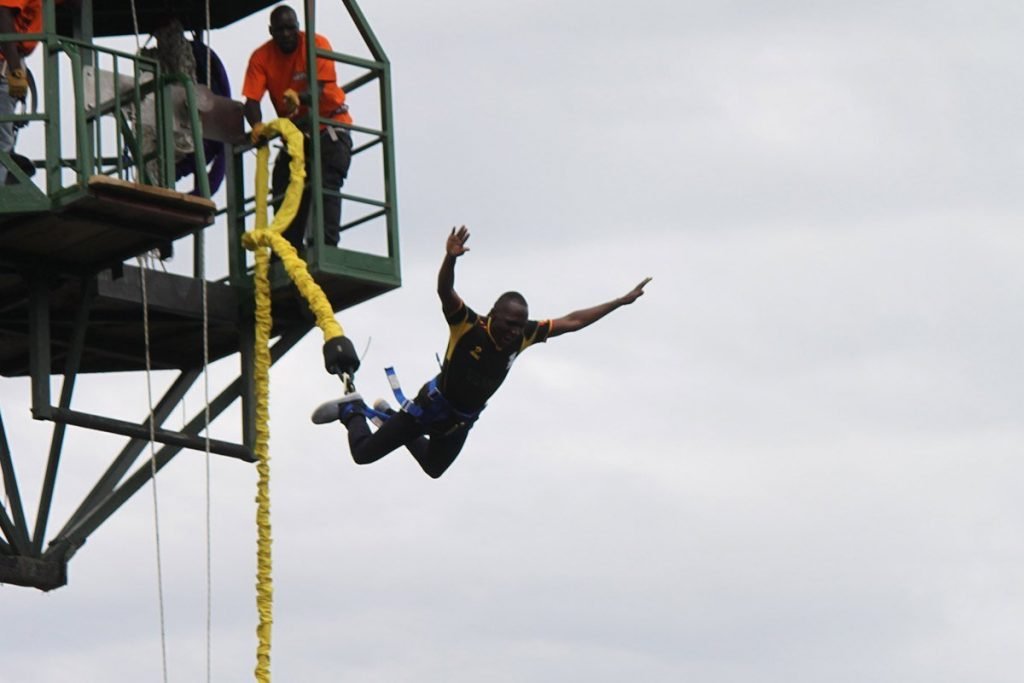 Another major step in Bujagali’s development as east Africa’s answer to the more southerly adventure-activity capital of Victoria Falls is a 44m bungee jump located at Adrift (adrift.ug) between Jinja and Bujagali.

Jumpers leap from a 12m cantilevered steel structure on top of a 32m cliff above the Nile and pay US$115 for the pleasure. If one jump isn’t enough, you’ll be offered a second one at a discount, and the third is free.

If rafting with Adrift, a jump will cost you much less. Note that, following complaints from local people (presumably those equipped with telescopes), clothing is now mandatory for daytime jumps. Naked bungee jumping is now permitted only at night and at the discretion of the management. 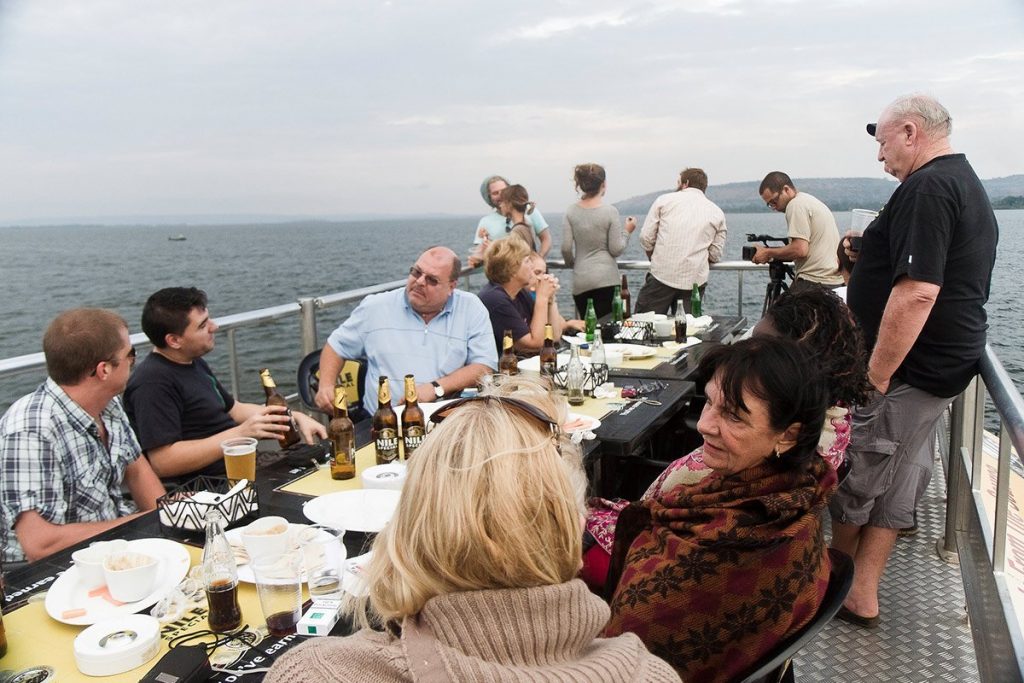 A relaxing Nile river cruise on a private boat, canoe, or launch boat is a perfect way to spend an evening at the source of the mighty river.

Explore Uganda Your Own Way!

Jinja is an awesome family destination. Jinja as one of Uganda’s top destinations can perfectly be added to any of these trips below. Check them out.

Other users also looked at these Uganda destinations;