With exciting African wildlife watching in arm’s reach of the capital, the 370-sq-km Lake Mburo National Park is an increasingly common stop on the safari circuit. It’s the only place in southern Uganda to see zebras and the only park in the country with impalas, slender mongoose, and giant bush rats.

One of Uganda’s smaller national parks, Lake Mburo, extends over 260km2 of undulating territory with an altitude range from 1,220m to 1,828m above sea level. The annual rainfall figure of around 800mm is relatively low, but roughly 20% of the park’s surface area consists of wetland habitats. The most important of these is Lake Mburo itself, the largest of five lakes that lie within the park boundaries and part of a cluster of 14 lakes fed by the Rwizi River and connected by several permanent and seasonal swamps. The park’s remainder mainly consists of open savanna and acacia woodland, with some of the more common trees being Acacia hockii, Acacia gerrardii, Acacia sieberiana, and Acacia polyacantha. In the western part of the park, the savanna is interspersed with rocky ridges and forested gorges—patches of papyrus swamp and narrow bands of the lush riparian woodland line the verges of the various lakes.

Lake Mburo is an underrated gem of a park, dominated by the eponymous lake, which — with its forest-fringed shores hemmed in by rolling green hills — is scenically reminiscent of the more celebrated Lake Naivasha in the Kenyan Rift Valley.

Despite its relative accessibility, Lake Mburo National Park is historically bypassed by most safaris and independent travelers, presumably due to the low ‘big five’ count, particularly the lack of elephants and lions. Even in the absence of wildlife heavyweights, however, Lake Mburo offers some excellent game viewing, and you’re as likely to see as many different large mammal species over a day as you would in any Ugandan national park. Some recent developments have raised the profile of the park.

With some desperation, safari operators have promoted Lake Mburo National Park as an ideal overnight stop along the long drive between Kampala and the national parks along the country’s western border. Amazingly, the number of travelers accepting the invitation has risen sharply since exemplary lodges opened up in the park, like the luxury Mihingo Lodge. 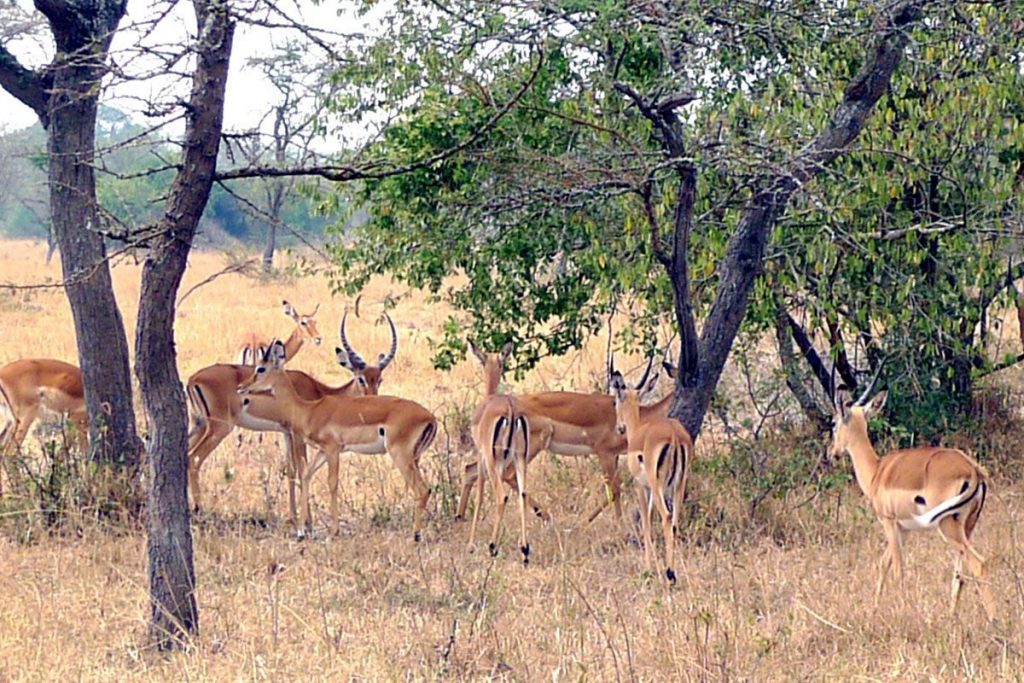 Lake Mburo is also the only Ugandan protected area where visitors can view game animals on foot, quad bike, and horseback. The park harbors several species not easily observed elsewhere in Uganda.

It is the only reserve in the country to support a population of impala, the handsome antelope for which Kampala is named, and one of only three protected areas countrywide where Burchell’s zebra occurs. The other two being the far less accessible Kidepo and Pian Upe.

Roan antelope, once common, are now locally extinct, but large herds of the majestic eland still move seasonally through parts of the park. The sitatunga antelope is confined to swamp interiors, and the klipspringer is occasionally observed in rocky areas.

The eerie rising nocturnal call of the spotted hyena is often heard from the camps, and tourists less frequently observe individuals crossing the road shortly after dawn.

Leopard, side-striped jackal, and various smaller predators are also present, most visibly white-tailed mongoose (at dusk and dawn) and three otter species resident in the lakes.

Bird experts have recorded 315 species of birds in Lake Mburo National Park. It is probably the best place in Uganda to see acacia-associated birds.

Rwonyo Camp is as good a place as any to look for the likes of mosque swallow, black-bellied bustard, bare-faced go-away bird, and Ruppell’s long-tailed starling.

A handful of birds recorded at Lake Mburo are essentially southern species at the very northern limit of their range, for instance, the southern ground hornbill, black-collared and black-throated barbets, and green-capped eremomela.

Of particular interest to birders are the swamps where six papyrus endemics are resident, including the brilliantly colored papyrus gonolek, the striking blue-headed coucal, the highly localized white-winged, and papyrus yellow warblers; recorded nowhere else in Uganda.

Getting There and Away

Two different roads connect Lake Mburo National Park to the main surfaced road between Masaka and Mbarara. The better approach road branches south at Sanga, 37km east of Mbarara, coming from the west. Coming from Kampala, it’s easier to use the road branching south from the 50km marker for Mbarara, about 20km past Lyantonde.

The drive from Kampala should take about four to five hours, not allowing for breaks. The approach roads are both quite rough, so a 4×4 vehicle is recommended, though not essential during the dry season, and either way, you’re looking at about an hour’s drive between the main road and the rest camp.

There is no public transport on either of the approach roads, but it is possible to charter a special hire from Sanga (expect to pay more than Ush40,000) or pick up a boda-boda (around Ush15,000).

Another option is to ask the UWA headquarters in Kampala to radio a day in advance to find out whether any safari vehicle will be going to Mbarara, in which case you could wait for it at Sanga.

One of the most exciting activities to be allowed in a Ugandan park in years, quad biking from the Mantana Tented Camp, is run by All Terrain Adventures, the same fellas at Bujagali Falls near Jinja. Inevitably, conservation purists question whether the activity is appropriate in a national park.

However, since Lake Mburo’s obscurity among tourist operators, and the absence of elephants and lions, it seems reasonable to make these deficiencies a selling point for safe quad biking and horseback safaris.

Principles aside, it is fantastic fun, and everyone who has tried it has loved the experience. The maximum group size is five people.

The Uganda safari trips provide a wilderness experience beyond the confines of a vehicle, and if you’re looking to race, pull wheelies, and other stunts, you’re in the wrong place! The patrons will provide you with introductory training, helmets, goggles, overalls, and refreshments.

Mihingo Lodge introduced horseback safaris in the east of the park — another first in a Ugandan protected area. Though the basic premise — escaping the car — is the same as quad biking, the horseback experience is heightened by the absence of engine noise. The event is tailored to your experience and requirements.

A lodge assistant will lead the kids on good-natured ponies while (at the other extreme) experienced riders can help a couple of ex-racehorses burn off some calories.

Rates vary from USD 25 for a quick 30-minute taster (the grassy valley floor 15 minutes’ ride from the lodge is habitually filled with wild game) to USD 130 for three-hour hacks to hilltop viewpoints with the option of bush breakfasts or sundowners.

A boat safari trip on the lake leaves from the jetty at the main campsite 1km from Rwonyo Camp. In addition to the attractive scenery and simple pleasure attached to being out on the water, the boat trip reliably produces good sightings of hippo, crocodile, buffalo, waterbuck, and bushbuck, and it’s also worth looking out for the three species of resident otter.

Among the more conspicuous waterbirds are African fish eagle, marabou stork, pied kingfisher, and various egrets and herons, while Ross’s turaco and Narina trogon are frequently seen in lakeside thickets.

Lake Mburo is possibly the most accessible place in Uganda to see the elusive African finfoot, which is generally associated with still water below overhanging branches.

It’s terribly unfashionable, but it is still possible to explore Lake Mburo by vehicle if you can shrug off the looks from horseriders and quad bikers. The most frequently used roads are the Impala and Zebra tracks, respectively connecting Sanga Gate and Nshara Gate to Rwonyo Rest Camp.

The quality of game viewing along these tracks is erratic, but, particularly during the wet season, substantial concentrations of impala, zebra, waterbuck, topi, and buffalo are often to be found only 2km from Rwonyo in the park-like savanna at the junction of Impala and Warukiri tracks.

Historically, when animals tend to congregate around the swamps and lakes during the dry season, the most productive roads were the Lakeside Track and Kigambira Loop. However, the increasingly dense bush cover has complicated game viewing in this area (unless you’re searching specifically for bush-dwelling birds) or hoping to spot a leopard.

Scrub has obscured all the 360° panorama from the once-grassy summit of Kigambira Hill. It’s a different situation if you branch east of the Lakeside track where the Kazuma and Ruroko tracks pass through relatively open savanna interspersed with rocky hills where you can observe pairs of klipspringer. Visitors can park up and walk to the top of Kazuma Hill, from where there is a view over four of the park’s lakes.

To the west of Rwonyo, starting near Sanga Gate, the Rwizi Track leads through an area of light acacia savanna Impala, eland, and Burchell’s zebra are common in this area.

The western shore of Lake Mburo is visible at times. After 12km, the track approaches the Rwizi River and fringing swamps. It then veers to the west, following the wooded watercourse for 33km before reaching Bisheshe Gate, a stretch that is particularly rewarding for birds. It is possible to drive beyond the gate to the main Mbarara road, but the track is in appalling condition and is challenging even in a 4×4 vehicle.

Guided walks (USD 30 pp) One of the major attractions of Lake Mburo is that you are permitted to walk anywhere in the park in the company of an armed ranger. Near to the camp, the road to the jetty remains an excellent place to walk: rich in birds and regularly visited by hippos.

An even better target is the viewing platform that overlooks a salt lick about 2km from the camp — this is an excellent place to see a wide variety of animals.

Of particular interest to walkers and birders is the Rubanga Forest, which lies off the Rwizi Track, and guests can only visit with the warden’s permission, who will provide you with an armed ranger.

To visit Lake Mburo National Park, non-residents pay a visitation fee of US$40/day. East African residents pay discounted rates of UGX 20,000 on showing proof of residency. An entrance permit is valid for 24hrs from the time of entrance. The standard vehicle entry fees are levied.

Explore Lake Mburo Your Own Way!

Lake Mburo National Park is an awesome family destination. Kids (5-15) are allowed in the park, take your family to this great safari destination in Uganda and let them experience the raw African savanna jungle.

Other users also looked at these Uganda destinations;